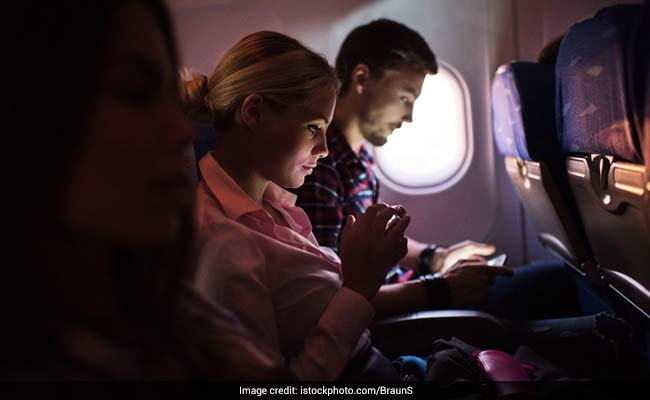 Falling in love on an airplane is the kind of story you only ever hear in a bar or see in a Lifetime movie. But for a brief time this winter, Delta Air Lines wanted to help passengers make it a reality – by gently nudging them to hit on other passengers.

“Be a little old school,” said the small print on the napkin, advertising Diet Coke. “Write down your number & give it to your plane crush. You never know …”

There was a little space on the napkin where flirtatious passengers could write down their name and another space for their number. The larger print said, “because you’re on a plane full of interesting people and hey,” again, “… you never know.”

But while some found the napkins clever and charming, others thought they were creepy. In fact, evidently enough complained that Delta and Coca-Cola apologized for the marketing stunt Wednesday, saying the napkins have since been removed from flights.

“We rotate Coke products regularly as part of our brand partnership, but missed the mark with this one,” Delta said in a statement to The Washington Post and other news outlets. “We are sorry for that and began removing the napkins from our aircraft in January.”

Coca-Cola also said in a statement to The Post, “We sincerely apologize to anyone we may have offended,” adding that the napkins are being replaced with other designs.

The ill-conceived napkins are the latest ad campaign to stir complaints on social media after marketers were accused of being inappropriate, racist or sexist. In March, Heineken had to apologize for its “sometimes lighter is better” beer ad, which critics called racist because a light beer slides across the bar, bypassing several black people, until arriving in front of a white woman. In October, an Australian hotel apologized for an ad featuring a man and woman eating breakfast in bed, which was called sexist because the man was reading a financial newspaper whereas the woman dug her nose into a Chanel coffee-table book. And just this week, some viewers called T-Mobile’s Super Bowl advertisements sexist because they feature annoying women. One dashes her boyfriend’s hopes to eat tacos for dinner by favoring sushi; another sends very long emotional texts.

Delta passengers began complaining about the napkins on social media in January, though it’s unclear when exactly the flights began using them. One passenger wrote Jan. 21: “Pretty sure no one appreciated unsolicited phone numbers in the ‘good old days’ and they sure as heck don’t want the number of someone who has been gawking at them on a plane for hours today. Not a good look.” Others argued the napkins “encourage affairs” or were “unintentionally creepy.”

But some passengers came to Delta’s defense, with many arguing that Delta’s apology represented the latest political correctness battle over a company’s attempt at humor.

“Thanks @CocaCola and @Delta, for encouraging people to TALK to one another, make new friends or do anything besides stare mindlessly at phones,” one user who identified herself as Ashley Bergin wrote to the companies on Twitter. “But don’t you know it’s practically illegal to flirt these days? Sad world, but nice try & not #creepy.”

One woman thanked Delta for helping out singles, while another said she was disappointed she couldn’t take advantage of the napkins on her next flight. (“Yall ruin everything,” she wrote.) One man, identified on Twitter as Sergey Avanesyan, said the napkins simply made him laugh on a recent flight from Madrid.

“I didn’t feel encouragement to do anything with other passengers just cuz the piece of paper under my drink [sic],” he wrote. “People need to calm down.”

Mike Huckabee, the former Arkansas governor and father of White House press secretary Sarah Sanders, even joked that he had received numerous napkins and was flattered.

“Dang! That’s why so many flight attendants and nice looking women kept giving me napkins on my @Delta flights,” he wrote.