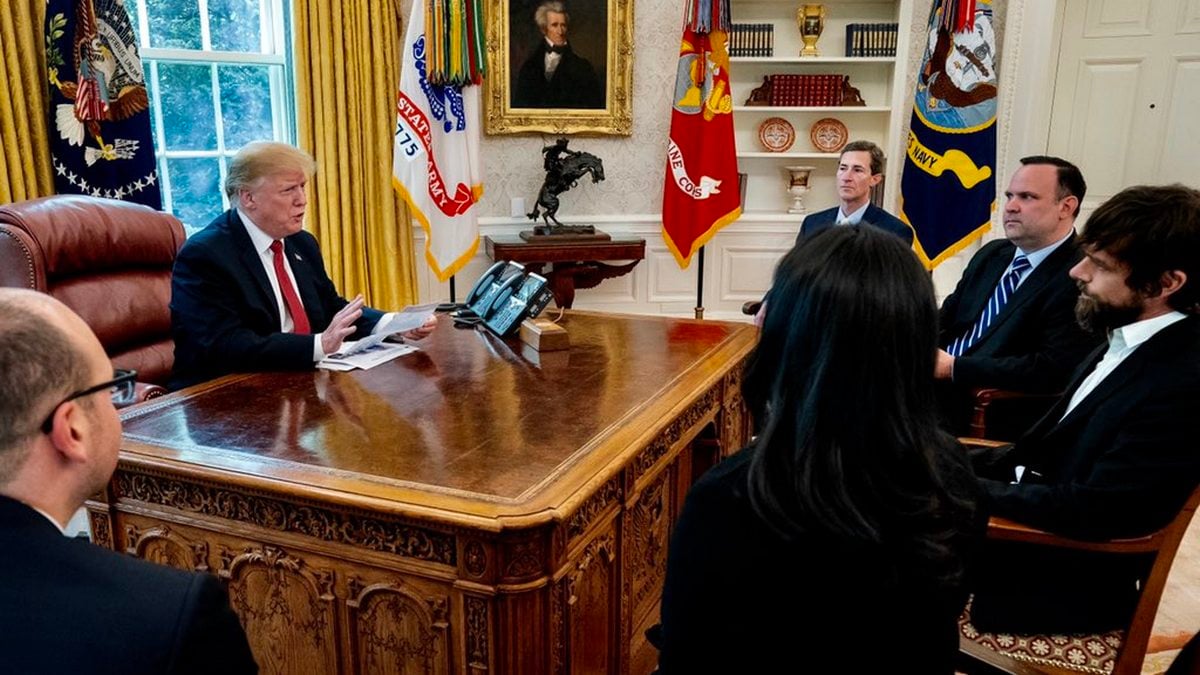 US President Donald Trump met with Twitter Chief Executive Jack Dorsey on Tuesday and spent a significant time questioning him about why he had lost some Twitter followers, a person briefed on the matter said.

The meeting, which was organised by the White House last week, came hours after Trump again attacked the social media company over his allegations it is biased against conservatives.

“Great meeting this afternoon at the @WhiteHouse with @Jack from @Twitter. Lots of subjects discussed regarding their platform, and the world of social media in general. Look forward to keeping an open dialogue!” Trump tweeted, posting a photo of Dorsey and others with him in the Oval Office.

Dorsey, who had not previously met with Trump, replied in a tweet: “Thank you for the time. Twitter is here to serve the entire public conversation, and we intend to make it healthier and more civil. Thanks for the discussion about that.”

The source, who was briefed on the meeting that included Twitter’s general counsel and public policy chief, said Dorsey explained in response to Trump’s concerns about losing followers that the company was working to remove fraudulent and spam accounts and that many famous people, including Dorsey himself, had lost followers as a result.

Earlier on Tuesday, Trump suggested Twitter was biased against him, without providing evidence. He wrote on Twitter that the company does not “treat me well as a Republican. Very discriminatory.”

Trump has been upset about losing followers. Trump lost 204,000, or 0.4 percent, of his 53.4 million followers in July, according to social media data firm Keyhole, when Twitter started its purge of suspicious accounts after it and other social media services were used in misinformation campaigns attempting to influence voters in the 2016 US presidential race and other elections.

In October, Trump wrote that “Twitter has removed many people from my account and, more importantly, they have seemingly done something that makes it much harder to join – they have stifled growth to a point where it is obvious to all. A few weeks ago it was a Rocket Ship, now it is a Blimp! Total Bias?”

Shares in Twitter jumped 13 percent on Tuesday after it reported quarterly revenue above analyst estimates, which executives said was the result of weeding out spam and abusive posts and targeting ads better.

Trump has one of the most-followed accounts on Twitter. But the president and Republicans in Congress have repeatedly criticised the company and its social media competitors for what they have called bias against conservatives, something Twitter denies.

Carlos Monje, Twitter’s public policy director, said at a Senate hearing earlier this month the site “does not use political viewpoints, perspectives or party affiliation to make any decisions, whether related to automatically ranking content on our service or how we develop or enforce our rules.”

Tecno Phantom Series Said to Be Launching in India on July...

Amazon Prime Day 2019: How to Prepare Yourself for Amazon's Biggest...