India is feasting on Venezuelan oil, after the U.S. imposed a de facto ban on crude imports from the Latin American nation.

While flows to the U.S. came to a halt, India became the No. 1 buyer of Venezuelan crude in the first half of February, with imports jumping 66 percent to 620,000 barrels a day. Indian refiners Reliance Industries Ltd and Nayara Energy Ltd, which is backed by Rosneft Oil Co PJSC, are driving the boost.

Still, Venezuelan crude exports have plunged since U.S. President Donald Trump ratcheted up sanctions against the country’s oil company. Shipments of oil, the commodity that bankrolls the regime of embattled president Nicolas Maduro, fell to 1.12 million barrels daily in the first half of February, down 9.2 percent compared with the same period in January. No U.S.-bound vessels have left Venezuelan ports in that time. 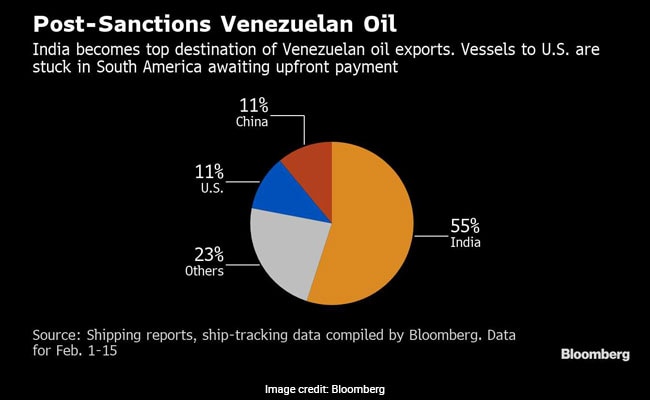 Meanwhile, shipments to long-time ally China, which is struggling to recover at least $50 billion it loaned to Venezuela over the past 12 years, have slowed down. Imports fell by 50 percent to 120,000 barrels daily.