Vicente del Bosque is number 31 in 90min’s Top 50 Great Managers of All Time series. Follow the rest of the series over the course of the next seven weeks.

​On 24 June 2003, less than 48 hours after they had won La Liga title on the final day of the season, Real Madrid dismissed Vicente del Bosque.

They had lost none of their last six games and just three all seasons, smashing Malaga, Atletico Madrid and Athletic in May and June to be crowned Spanish champions ahead of surprise contenders Real Sociedad.

In little under four years, Del Bosque – a former midfielder, who had spent over three decades at the club in some capacity – had won Real Madrid two Champions League titles, two La Liga titles, the Supercopa de España, the UEFA Super Cup and the Intercontinental Cup.

It was not enough. 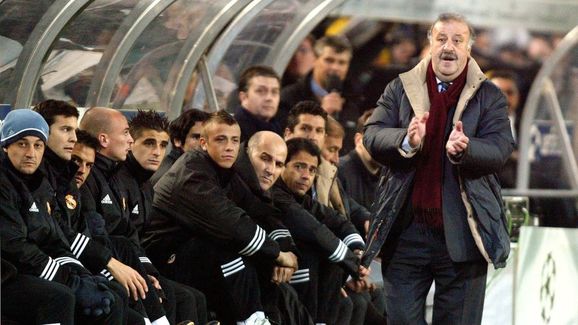 Quiet and unassuming, the club custodian was only 52 but his look, all jowls and thick greying moustache, gave him the appearance of a man years older.

Ronaldo had just finished his first season for ​Los Blancos, Luis Figo, Zinedine Zidane, Raul and Roberto Carlos were all there. David Beckham was on the way. These were the Galacticos and the infamous Florentino Perez (then in his first spell as club president) needed a glamorous manager at the helm. He needed someone less conservative, less shy, less… ugly.

This was the same Real Madrid who allegedly turned down Ronaldinho the same year for his face and its lack of marketing potential.

Xavi Hernández: “We love him. The group atmosphere with him around is magnificent. Vicente is the most human character I’ve ever come across in a dressing room.”

“Real Madrid needs someone with a less out-of-date training manual,” Perez was ​quoted as saying.

And that was that. The most successful manager at Real Madrid post-Franco was gone without so much as a whimper and replaced by Sir Alex Ferguson’s former assistant at Manchester United, Carlos Queiroz. Claude Makelele was sold. The ​BBC called Del Bosque the ‘unluckiest manager ever sacked’.

Ever the gentleman, he held his tongue and shunned media attention at the time, but later admitted he cried at the decision.

In 2011 he told MARCA, “I understand that sometimes it’s necessary to change the ground a little, but instead of affection they gave me a beating.” 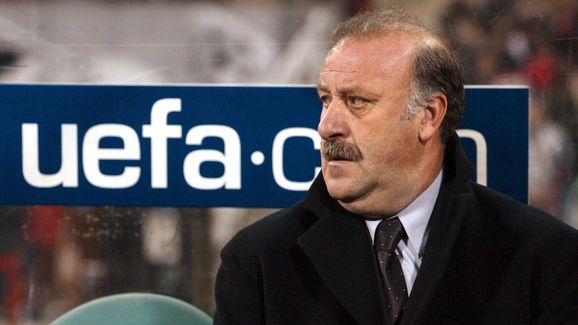 Nicknamed Palillo (toothpick) as a youth, Del Bosque grew up in the western city Salamanca, the son of a radical socialist in an era in Spain when free speech and workers rights were dangerous ideas.

He became a solid, sensible midfielder who spent almost his entire senior playing career at Real Madrid, bar a few loan spells. He made well over 400 appearances as a player, winning La Liga five times and the Copa del Rey four, but he was never the star. He was never meant to be.

He didn’t want the limelight and the limelight didn’t really want him. It was much the same at the start of his coaching career. Del Bosque, the good company man, worked his way up the ladder at the world’s most glamorous club with various youth and reserve team posts until he was made caretaker manager first in 1994 and then again in 1996, before being made permanent boss in 1999 following John Toshack’s sacking.

Steve McManaman: “There should be statues of Del Bosque in every Spanish city given what he has achieved for that country, but most of all in Madrid.”

Following his exit four years on, it looked like Del Bosque might drift into a footballing wilderness. A virtual one-club man, left behind by a new age of bigger means better, style over substance, brash beats humble.

But Spain was his saviour and he was theirs.

Taking over from Luis Aragones in 2008, ​the man who had launched Spain back to the top of world football after decades of drab underachievement, Del Bosque did what he does best: getting great players to just be great.

Any trepidation that a greyer, saggier looking Del Bosque was a man too long out of it – with an ‘out-of-date training manual’ as Perez put it – was quickly dismissed as Spain won every single one of their qualifiers in the lead up to the 2010 World Cup in South Africa. 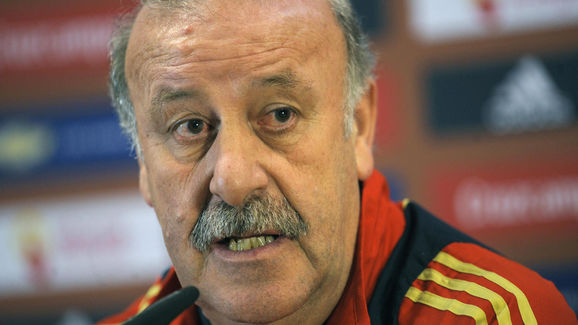 The Spain team at Del Bosque’s disposal for that tournament and Euro 2012 after was embarrassingly good. If Real Madrid had had to juggle the Zidanes y Pavones strategy, with La Roja Del Bosque only had to worry about finding a way to accommodate so much talent.

While England fretted over how to fit Frank Lampard and Steven Gerrard into one team, Del Bosque used Andres Iniesta, Cesc Fabregas and David Silva among others to ‘jugar entre lineas’ (play between the lines) blurring the distinction between midfield and forward play in a way that scrambled the brains of defences as experienced and heralded as Italy’s in the final of 2012.

In both finals, in Johannesburg on 11 July 2010 and Kiev on 1 July 2012, Del Bosque cut a calm collected presence in the dugout, his natural hang-dog look not betraying any signs of pressure.

Iker Casillas: “He put us in seventh heaven on 12 July 2010. He has been as calm during the tough times as he has in the moments of glory. Respect and a natural approach is how he behaves day to day.”

He did not gesticulate in the technical area, he did not run on the pitch and pump his fists wildly at the crowd, his suit trousers remained free of grass stains and he did not seek out reporters to boast or gush.

Iniesta’s finish, Xavi’s brilliance and the death by a thousand passes are what’s remembered from that era of Spanish football – arguably the greatest international team the world has ever seen.

In the trophy presentations, the players took pride of place, parading around with the cups with uncontained glee as Del Bosque skulks in the background, with a half-smile on his face, jacket still on, like an uncle at a wedding looking for an excuse to leave early and beat the traffic. It was s similar story at Real Madrid, where according to ​journalist Graham Hunter, the popular manager once foiled the plan of his players to throw him into the jacuzzi in the post-match celebrations and snuck off early.

A humble, dignified sort of genius, his philosophy and approach to football is perhaps best summed up by the following quote.

Before the 2012 tournament, ten years after his second Champions League triumph with Real Madrid when asked about his teams chances of retaining their Euro crown, he replied almost quaintly: “The important thing is not to lose a sense of modesty, that they continue being good guys and if they continue like that, everything can get better.” While Del Bosque’s style and tactics will never be poured over like Arrigo Sacchi, Jose Mourinho or Pep Guardiola, Del Bosque was a master of the most human elements of football. He made his players feel happy, trusted and confident. He facilitated an environment where they could be the best together, with little room for ego and pressure.

He won everything worth winning and it never looked particularly difficult. He was a subtle, master conductor of the greatest orchestras, always keeping the focus on his delighted performers, shunning any spotlight of his own.

Unfortunately and somewhat ironically for Perez, the ‘ugly’, quiet man with the walrus whiskers and little appetite for celebrity was the very best person in the world to make the impossible Galacticos project work.

Number 48: Claudio Ranieri: A Ridiculed Tinkerman Who Masterminded One of Football’s Greatest Ever Achievements

Number 42: Massimiliano Allegri: The Masterful Tactician Who Won Serie A Five Times in a Row

Number 40: Luis Aragones: Spain’s Most Important Manager, the Atleti Rock and the Modern Father of Tiki-Taka

Number 39: Herbert Chapman: One of Football’s Great Innovators & Mastermind Behind the ‘W-M’ Formation

Number 38: Carlos Alberto Parreira: The International Specialist Who Never Shied Away From a Challenge

Number 36: Viktor Maslov: Soviet Pioneer of the 4-4-2 & the Innovator of Pressing

Number 35: Rafa Benitez: The Conquerer of La Liga Who Masterminded That Comeback in Istanbul

Number 33: Luiz Felipe Scolari: How the Enigmatic ‘Big Phil’ Succeeded as Much as He Failed on the Big Stage

Number 32: ​Jupp Heynckes: The Legendary Manager Who Masterminded ‘the Greatest Bayern Side Ever’

PSG Manager Thomas Tuchel Asks Media Not to Be Too Harsh...