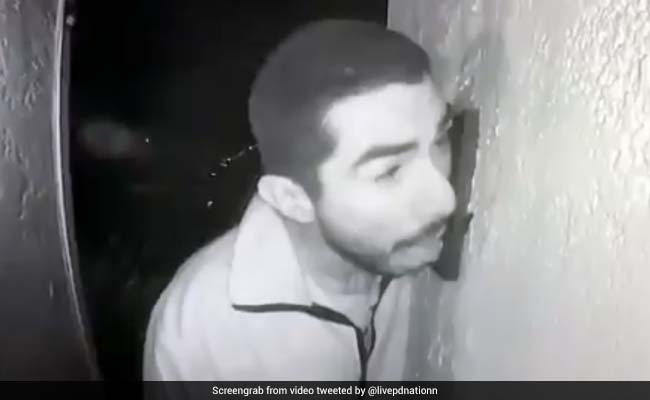 Police in California are searching for a man who spent three hours licking a doorbell while a family slept inside. Roberto Daniel Arroyo was captured on camera licking the doorbell of the Dungans’ home in Salinas, California, on Saturday morning, reports Sky News.

The homeowner, Sylvia Dungan, told KION that she was not at home at the time of the incident, but that her children were. They checked the security camera footage after receiving notifications about activity by the front door – and were shocked to see Roberto Arroyo licking the doorbell while staring into the camera.

The bizarre footage has garnered thousands of views on social media. Take a look at it below:

Ring Doorbell footage of alleged suspect. I literally have no words. #whatisgoingon#doorbelllicker#livepd#livepdnation#livepdwatchpartypic.twitter.com/NnVug7RrUX

The Dungans alerted Salinas Police about the incident, who quickly identified the man as Roberto Daniel Arroyo. Police added that Roberto appeared to “relieve himself” in the Dungans’ garden after licking the doorbell for about three hours.

#doorbelllicker We had just installed our Ring doorbell just less than a month ago. It paid off. Our home is the doorbell that was featured on #LivePD, 1/05/19 episode. So funny. It was great. Should I remove my sign (over perp’s right shoulder)? I’m embarrassed for his family. pic.twitter.com/JKnYFd6i3F

Cops are now searching for the 33-year-old doorbell licker. He could face two charges for petty theft and prowling.