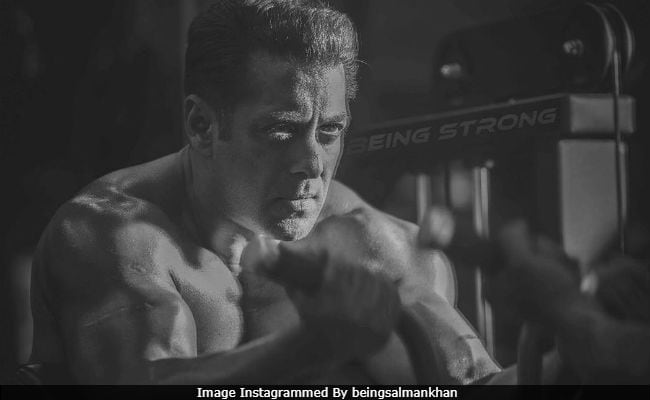 Have you seen Salman Khan‘s latest Instagram post yet? The Internet is crushing over a shirtless picture of Salman, who captioned his post as, “Being real strong.” It’s been a while since Salman posted such a picture of himself as he is currently working to get a lean physique for the upcoming film Bharat. In the picture, Salman appears to be looking at a mirror and working out. The now viral post has got over 8 lakh likes including that of celebs like Sonam Kapoor, her husband Anand Ahuja, Sonakshi Sinha, Bobby Deol and many others. Sonam also posted a heart emoticon in the comment thread. “Maar daala and “happy Valentine’s Day, thanks for sharing it” are some of the other comments on Salman’s post. Our favourite – “Tu Chahiye, Tu Chahiye.” (His song from the film Bajrangi Bhaijaan).

At his 53rd birthday party in December, Salman revealed that his New Year resolution is to make six-pack abs, on his mother Salma Khan’s request. “Four days ago, my mother told me that now this four-pack body will not be enough and she asked me, ‘What is your resolution for Next Year?’ So, I told her, ‘Nothing.’ Then she told me, ‘You have to achieve six-pack body.’ So, now that means, I have to be disciplined and I am doing that,” he was quoted as saying by news agency IANS.

A 10,000 square-foot gym has recently been constructed for Salman Khan on Bharat sets, where he works out while filming. It has a range of fitness equipment from his gym line and handpicked by him.

Bharat, the Hindi adaptation of South Korean film Ode To My Father, is a circus drama set in the Sixties.

Bharat is slated for an Eid release.