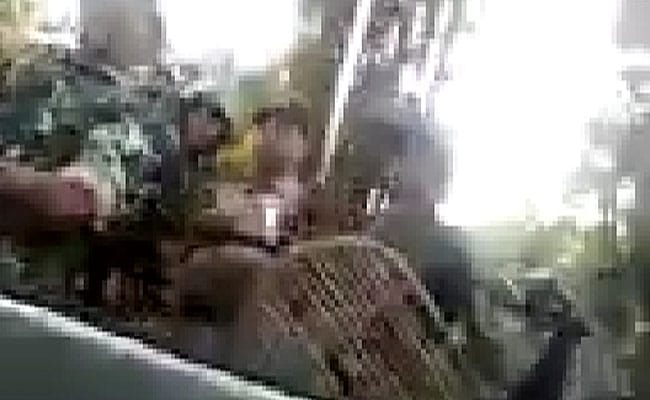 Shocking videos of Tripura policemen allegedly attacking an ambulance carrying two injured protesters to a hospital went viral on social media earlier this week, giving credence to allegations of a brutal crackdown against those opposing the central government’s Citizenship (Amendment) Bill-2016 in the state. The people inside the vehicle, who were apparently wounded in police firing, could be seen crying for mercy.

The first video of the incident that occurred on January 8 shows a Tripura State Rifles team stopping an ambulance transporting the two bullet-hit protesters to a hospital outside Khumulwng in the western part of the state. The next shot has them beating up the driver, who runs from the spot as the injured shriek in agony. The policemen, clad in anti-riot helmets and vests, can be seen hitting the vehicle with batons while one smashes its windscreen. The second clip, an apparent follow-up of the first shot, bears visuals of the two injured men lying inside the wrecked ambulance.

The police have denied the incident. “I cannot comment on the video because I haven’t watched it. All I can say is that the police were the ones who took the injured to hospital. We don’t attack ambulances,” Additional Director General of Police Rajiv Singh said over the phone from Agartala.

The brutal incident followed the injury of six tribal youngsters in police firing during a protest by the North East Students’ Organisation against the controversial bill. The authorities said police and paramilitary personnel had no choice but to lathi-charge and fire in the air to disperse the protesters. The injured included a Tripura State Rifles personnel and six Twipra Students Federation members who were part of a group that blocked the Assam-Agartala National Highway in Madhabbari.

The incident was condemned by the opposition and allies of the BJP alike, with an NDA partner — the Indigenous Nationalist Part of Tripura (INPT) — even demanding the resignation of Chief Minister Biplab Kumar Deb. They have also sought a judicial probe headed by a sitting High Court judge, and compensation of Rs 20 lakh as well as government jobs for families of the injured. “Police personnel under the BJP-led government opened fire on unarmed innocents while they were protesting against the bill in a democratic manner on Tuesday,” INPT general secretary Jagadhish Debbarma told reporters in Agartala, calling for a 12-hour shutdown on Saturday.

Tripura BJP spokesperson Nabendu Bhattacharjee dismissed the allegations, claiming that the tribal parties responsible for the shutdown “have no base among the masses”. He also alleged that these organisations were “conspiring against the state government” in connivance with the Left parties.

The Lok Sabha had passed the Citizenship (Amendment) Bill 2016 — which seeks to grant speedy citizenship to non-Muslim migrants from three neighbouring states — on January 8 amid strong protests by political parties such as the Congress and the Trinamool Congress. The opposition terms the legislation as discriminatory.