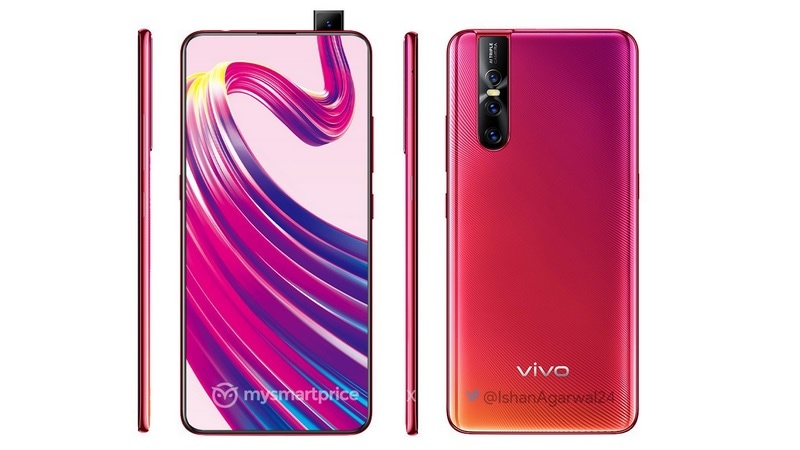 Vivo V15 Pro – the company’s next smartphone with a pop-up selfie camera – is all set to launch at an event on February 20, 2019. But ahead of the official announcement, a set of Vivo V15 Pro photos, claiming to be the official renders of the smartphone, have appeared online. The leaked images show the upcoming smartphone in two colour options – Gradient Blue and Gradient Red – aside from giving us a better look at its entire profile.

Earlier, Vivo’s official teaser had also given us a good look at the Vivo V15 Pro‘s gradient blue variant, but the fresh leak has revealed the smartphone’s gradient red colour option as well. The latter has a deep pinkish-red hue with a yellow undertone to it and certainly looks appealing. Upon closer look, one can also make out a wave-like pattern running across the rear panel.

The leaked images also give us a more detailed look at the upcoming smartphone from all angles. The top edge is shown housing the pop-up selfie camera and the 3.5mm headphone jack while the bottom edge has the charging port, the SIM card tray and the speaker grill. The bezels look impressively thin and there is virtually no chin to disrupt the all-screen design, but tipster Ishan Agarwal – who is also the source of the leaked images – claims that the final product might have some bezels after all, as Vivo has allegedly altered them in marketing images in the past.

Vivo has already confirmed that the Vivo V15 Pro will feature a triple rear camera setup and 32-megapixel pop-up selfie camera, but a previous leak had allegedly revealed more information about the upcoming smartphone’s hardware. The Vivo V15 Pro will reportedly be powered by the Qualcomm Snapdragon 675 SoC, paired with 6GB of RAM and 128GB of internal storage.

The Vivo V15 Pro is also rumoured to sport a 6.39-inch full-HD+ Super AMOLED Ultra FullView Display and will draw power from a 3,700mAh battery with “Dual Engine” fast charging technology. As for the triple rear camera, it is said to include a 48-megapixel primary sensor, an 8-megapixel secondary sensor, and a 5-megapixel tertiary sensor.

The Vivo V15 Pro will also come equipped with an in-display fingerprint sensor and the same has officially been confirmed by the company’s teaser video. As for the pricing, the Vivo V15 Pro will reportedly carry a price tag of Rs. 33,000. But do take the leaked information with a fair bit of scepticism until the smartphone is officially unveiled next week.