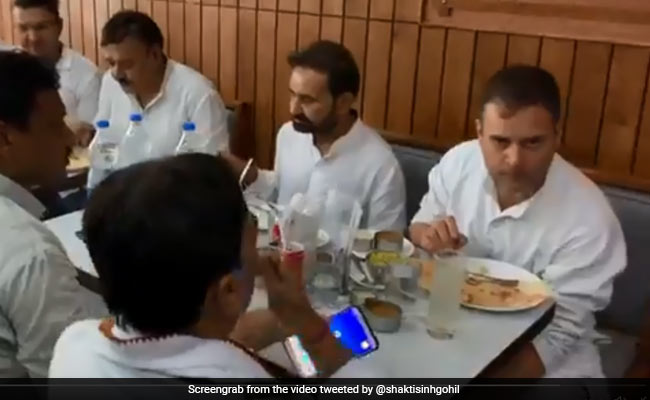 Congress leader Rahul Gandhi, who was granted bail today by a court in Patna in a defamation case, visited a restaurant in Maurya Lok Place in the Bihar capital and feasted on South Indian speciality dosa for lunch.

The former Congress president stopped at the restaurant before he left for the Patna airport. Mr Gandhi had arrived in the city for the hearing of a defamation case filed by Bihar Deputy Chief Minister Sushil Modi for allegedly saying “all thieves have the surname Modi”.

Mr Gandhi, the 49-year-old lawmaker from Kerala’s Wayanad, had allegedly made the remark at an election rally in Maharashtra.

Addressing a poll rally in Karnataka during the Lok Sabha election campaign in April, Mr Gandhi had said, “I have a question. Why do all the thieves have Modi in their names? Be it Nirav Modi, Lalit Modi or Narendra Modi? We don’t know how many more such Modis will come out.”

The Patna court ordered the bail for Mr Gandhi on a surety amount of Rs 10,000.

Earlier today, Mr Gandhi had said he will appear in court for the case filed by his “political opponents” in the BJP-RSS to allegedly “harass and intimidate” him.

Mr Gandhi pleaded ‘not guilty’ today as well, and shortly after being granted bail, claimed, “Whoever raises their voice against the Modi government or BJP-RSS is slapped with court cases.”