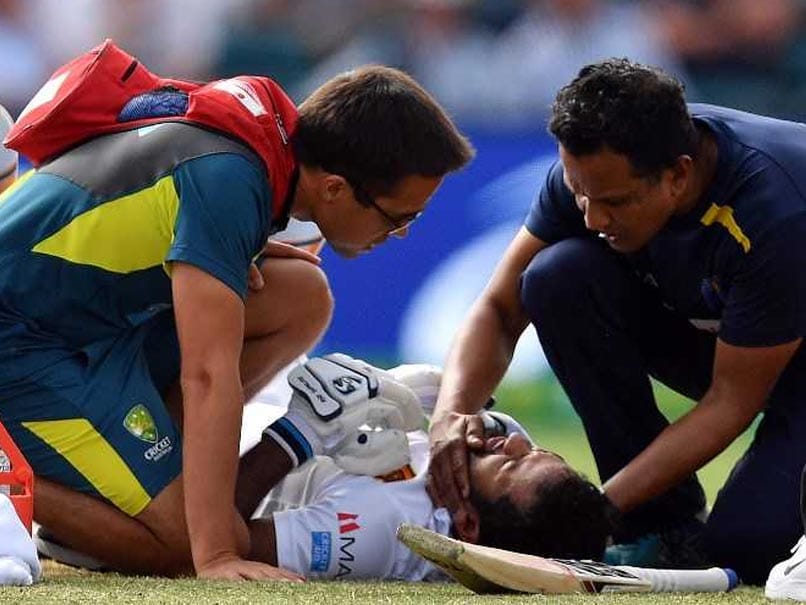 Opener Dimuth Karunaratne was stretchered off in a neck brace after taking a nasty hit from a bouncer by Pat Cummins on Day 2 of the second Test between Australia and Sri Lanka in Canberra on Saturday. Karunaratne, playing his 58th Test, was 46 not out when he was hit in the back of the neck by a 142kph delivery from Cummins. He fell to the ground dropping his bat as Australian players ran to assist. A doctor and physio sprinted onto the ground and called for more medics.

After about 10 minutes, he was put onto a stretcher and taken off the field on a golf buggy.

After the medical examination it has been declared that Karunaratne is in “no danger”.

Coach Chandika Hathurusingha said he was “in good spirits” and in “no danger”.

“It was a bit scary at the start the way he fell back, but he was okay throughout, he was talking to the umpires and the physio,” he said after play ended for the day.

“It hit on the back of the neck so he is being assessed.”

Cricket Australia said he complained of pain in the neck and tingling to the hands.

Cummins said the incident was “just one of those things that happens in cricket.”

“Obviously it’s never a nice feeling seeing someone go down like that,” Cummins told Fox Cricket.

“The good thing was it looked like he was moving his hands and the physio said he seemed alright when he left.

“I wish him all the best and hopefully he’s doing alright.”