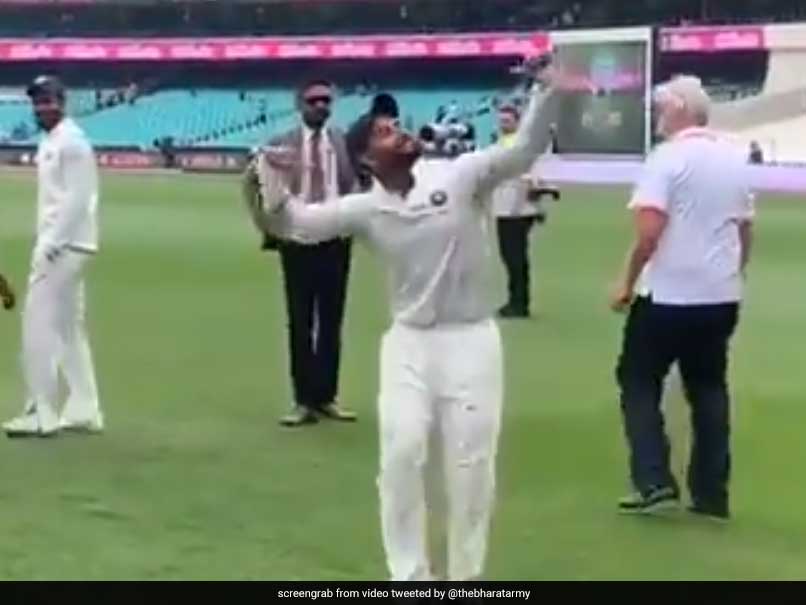 Rishabh Pant, the Indian team wicket-keeper batsman, entertained his fans not only with his skill with the bat but also with his banters from behind the stumps during the recently-concluded Test series. During the series, the Bharat Army fan group dedicated a song to Rishabh Pant, taking a dig at the Australian skipper Tim Paine whose banter had asked the Indian wicket-keeper to babysit his kids. An elated Pant, after India’s historic Test series victory against Australia, appreciated the Bharat Army’s effort and showed his dance moves to the song made for him during the post-match celebration.

Bharat Army posted the video of Rishabh Pant’s dance on their Twitter account saying, “Scenes of @RishabPant777 dancing to our song; ‘We’ve got Pant’!”

After the Melbourne Test, Pant had also proved that he was a sport as he posed with Tim Paine’s wife Bonnie, who posted the picture on her Instagram story, calling Pant the “best babysitter.”

During the series, Pant had notched up 320 runs with the highest score of 159 not out in Sydney. As a result, he attained the joint-highest rating by an Indian wicket-keeper batsman.

Pant also surpassed former Indian skipper MS Dhoni in Test rating with 673 points. Dhoni, who retired from the longest format of the game in 2014, had the aggregate of 662 points.

The Delhi batsman has so far played nine Tests for the national team, scoring 696 at an average of 49.71. He also has two centuries and identical number of half-centuries to his name.