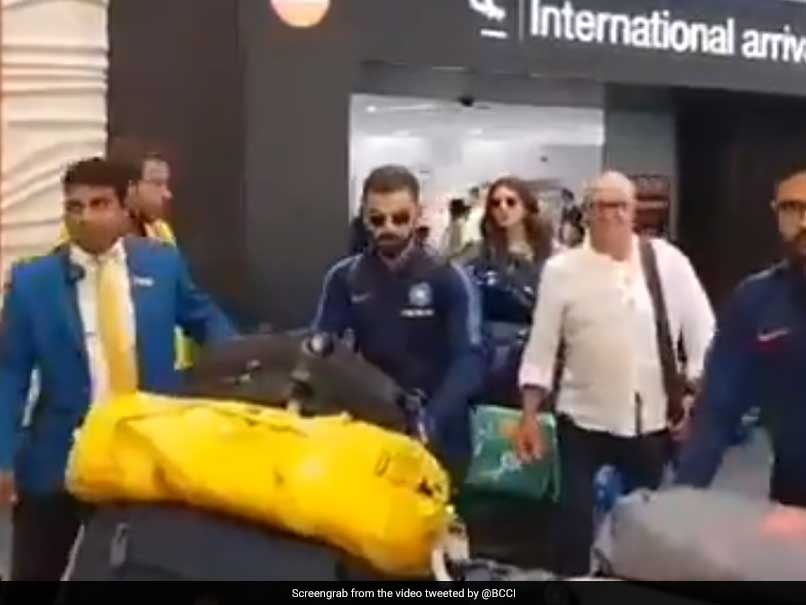 Team India arrived in New Zealand for a tough tour, comprising five One-Day Internationals and three T20 Internationals, starting on Wednesday. Along with the team, India captain Virat Kohli and his wife Anushka Sharma reached the Auckland airport amid loud cheers. The first match of five-ODI series will be played in Napier on Wednesday. The Board of Control for Cricket in India (BCCI) shared a video of the team’s arriving in Auckland on Sunday, saying: “Hello #TeamIndia. Auckland welcomes you #NZvIND.”

Under the captaincy of Virat Kohli, India recently won their first-ever bilateral ODI series in Australia. Earlier, they had won their maiden Test series in Australia in 71 years and 11 attempts after levelling a three-match T20I series 1-1 on a highly-successful tour Down Under.

On the other hand, New Zealand decimated the Sri Lankans at home. They won the two-match Test series 1-0, swept the three-match ODI series 3-0 and won the one-off T20I to end the series on a high.

The home team look in top form with captain Kane Williamson leading from the front. Besides the skipper, seasoned batsmen Ross Taylor and Martin Guptill are also enjoying a great spell with the bat at the moment.

In the recent 3-0 routing of Sri Lanka in the three-match ODI series at home, Williamson led by example scoring 132 runs in three innings with two fifty-plus knocks.

Taylor, 34, finished as the top run-scorer in the ODI series with 281 runs, including a noteworthy 137-run knock in the third and final match in Nelson.

New Zealand opener Guptill accumulated 153 runs in the ODI series with a match-winning century in the first match in Mount Maunganui.

New Zealand have brought together their strongest possible line-up for the ODI series against India.