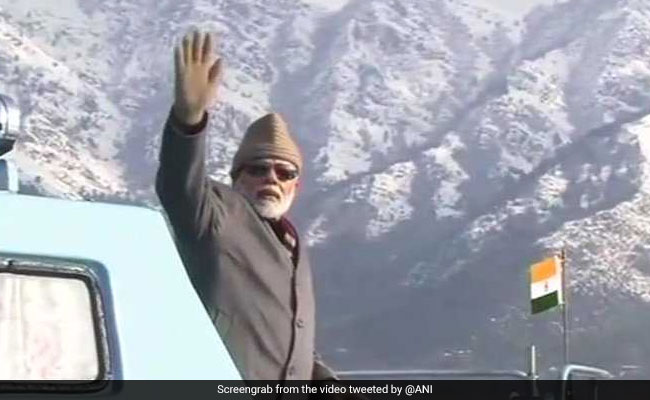 Prime Minister Narendra Modi toured the Dal Lake in Srinagar on Sunday as part of his day-long visit to Jammu and Kashmir.

PM Modi’s first stop was Leh, where he interacted with locals and dedicated key education and power projects to residents of the region. He then went to Jammu, where he launched several educational and infrastructure projects.

The last stop in PM Modi’s day-long visit was Srinagar to lay foundation stones for development projects, where he also made a stop at the famous Dal lake.

In a video posted by news agency ANI on Twitter, PM Modi is seen waving as he tours the Dal Lake on a boat.

Separatists had called for a complete shutdown to protest the prime minister’s visit.

Former chief minister of Jammu and Kashmir Mehbooba Mufti, along with other opposition leaders, took a swipe at the prime minister for waving at “imaginary friends in Kashmir” during the boat ride.

For the those who are asking , the 👋 is for BJPs countless imaginary ‘friends’ in Kashmir. https://t.co/l0YPq2oiVy

National Conference leader Omar Abdullah said “there is no way the PM would be waving at an empty lake.”

This camera person has done the Hon PM a huge disservice by not showing all the people furiously waving back because there is no way the PM would be waving at an empty lake. https://t.co/YJoEfX8DJ3

Congress leader Salman Nizami posted an image of PM Modi from the tour with the caption “waving to the mountains.”

But who is he waving at? Watch till end…. 😉 pic.twitter.com/1O0WPXCYi3

The BJP had pulled out of an alliance with Mehbooba Mufti’s PDP last year.