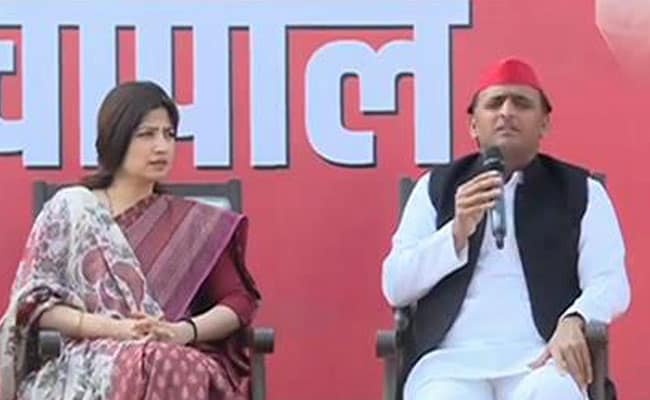 Akhilesh Yadav, a day before his joint press conference with Mayawati, today gave an indication of their alliance as he remarked at a public event: “We have found the glue because of the BJP”.

The Samajwadi Party chief is widely expected to announce his “mahagathbandhan” or grand alliance with Mayawati’s Bahujan Samaj Party (BSP) for the national election tomorrow at a five-star hotel in Uttar Pradesh’s Lucknow.

The alliance is expected to include smaller parties like the Rashtriya Lok Dal (RLD) and the Nishad Party but the Congress is reportedly not part of it.

Akhilesh Yadav, during a “chaupal” or gathering in Kannauj, the parliamentary seat of his wife Dimple Yadav, said the parties had found the “glue” after bypolls last year in which the BJP lost three seats, including those of Chief Minister Yogi Adityanath and his deputy.

“We Samajwadis thought that we are way ahead in development but how could we shore up our numbers? When we got the numbers right, they lost even Gorakhpur (Yogi Adityanath’s base).

Their deputy Chief Minister’s seat was also lost. It is up to us how to take this forward. Earlier we did not have a glue but now we have found it . We have found this glue because of the BJP,” said the former chief minister.

Mr Yadav also took a swipe at the ruling BJP over allies leaving it. In March, the Telugu Desam Party (TDP) ended its alliance with the BJP over the centre’s refusal to grant a special category status to Andhra Pradesh. Upendra Kushwaha quit the BJP-led National Democratic Alliance (NDA) last month because of his growing resentment with the ruling party and its seat-sharing deal in Bihar. In Assam, the Asom Gana Parishad pulled out of the  BJP-led coalition government earlier this week over the Citizenship Amendment Bill.

“The last few elections have seen different parties come together and fight . People have not noticed how many alliances the BJP has stitched up. Even now there is a perception that they are very strong . This is because they have regional leaders from other parties with them. But these parties are deserting them now,” he said.