​West Ham host Liverpool in an enticing Premier League clash at the London Stadium on Monday, as Jurgen Klopp’s side look to continue their charge for the title.

Jurgen Klopp’s side missed the chance to capitalise on Manchester City’s 2-1 defeat to Newcastle in the midweek, as the Reds were held to a 1-1 draw at home to Leicester on Wednesday.

Meanwhile, ​West Ham will look to bounce back from a damaging 3-0 defeat away to ​Wolves on Tuesday, although hosting a title-chasing ​Liverpool side is unlikely to offer a clear opportunity for respite for Manuel Pellegrini’s team.

Liverpool are due to host ​Bournemouth the following Saturday before returning to Champions League action against ​Bayern Munich three days later, whilst West Ham have lost their last three games in all competitions.e

Check out 90min’s preview of the game:

First choice goalkeeper Lukasz Fabianski is due to return in time for Monday’s game after recovering from an arm injury. However, star striker ​Marko Arnautovic remains a fitness doubt and is having a foot injury assessed ahead of the clash with Liverpool.

Manuel Pellegrini could be boosted by the return to fitness of left back Aaron Cresswell, who has been out with a hamstring injury, though the defender is also being assessed ahead of the match. Lucas Perez is also facing a fitness test regarding an ankle problem.

The Hammers will be without midfielder Samir Nasri, with the Frenchman suffering with a calf injury, whilst centre back Fabian Balbuena is ruled out until March with a knee injury, with playmaker Manuel Lanzini also absent for a similar timeframe with an ACL problem.

Meanwhile, fears have grown that ​Jack Wilshere’s ankle injury may rule him out for the rest of the season alongside fellow midfielder Carlos Sanchez and forward Andriy Yarmolenko, whilst defender Steven Reid’s return date from his knee problem remains unknown.

Liverpool remain without Joe Gomez amid fears that the defender may require surgery as he continues to recover from a fractured leg which forced the youngster to sit out the Reds’ festive period.

Jürgen Klopp will not rush Joe Gomez’s recovery from the injury that has kept him out of action since December.

Fellow defender ​Trent Alexander-Arnold also continues to miss out, though the right back is due to return to action this month.

Liverpool boast a vastly superior record over West Ham in the 138 times that the teams have previously met.

The Reds have recorded 74 victories in total over Monday’s opponents, drawing 36 times, whilst West Ham have beaten Liverpool on 28 occasions. 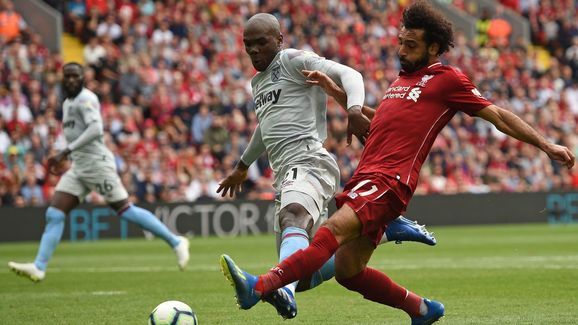 Jurgen Klopp’s side produced an emphatic display as they beat West Ham 4-0 when the two sides last met at Anfield earlier in the season. West Ham last managed to escape defeat to the Reds when they earned a 2-2 draw on Merseyside in December 2016.

The Hammers last beat Liverpool when they sealed a 2-1 victory in an FA Cup fourth round replay against Monday’s opposition, courtesy of a Michail Antonio strike and a dramatic winner from Angelo Ogbonna in extra time.

West Ham have endured a dramatic dip in form of late which has coincided with the damaging off-field speculation over the future of Marko Arnautovic during the January transfer window.

A 1-0 win at home to Arsenal seemed set to lead the Hammers’ push towards the top half of the table, though Pellegrini’s side have since suffered two consecutive league defeats, and also fell victim to an FA Cup shock exit as they were eliminated by AFC Wimbledon.

“If we want to beat Liverpool we need to play a good game, defend well, and we need to play with a high pace as we have done against a lot of teams at home.”https://t.co/FJGE6UmA4O

Liverpool have set the tone as league leaders, bouncing back from back-to-back defeats to champions ​Manchester City in the Premier League and ​Wolves in the FA Cup with two consecutive victories over ​Brighton and ​Crystal Palace and a draw with Leicester to maintain their lead.

Here is a look at how both sides have fared in their previous five outings:

Both sides are in great need of victory on Monday for very different reasons. West Ham will be desperate to bounce back from a torrid recent run of form in front of their home fans with a morale-boosting performance, whilst Liverpool will seek to return to winning ways.

The Reds dropped points last time out at home to Leicester and will know that three points are a must when they travel to east London on Monday as they seek to maintain a healthy lead at the top of the league.

West Ham are likely to show increased resolve as Pellegrini’s side go in search of a positive result, though Liverpool’s strong charge for the Premier League title is likely to bring too much force and attacking quality for the home side to handle.

Real Madrid's Casemiro Says There is no Excuse For Defeat to...