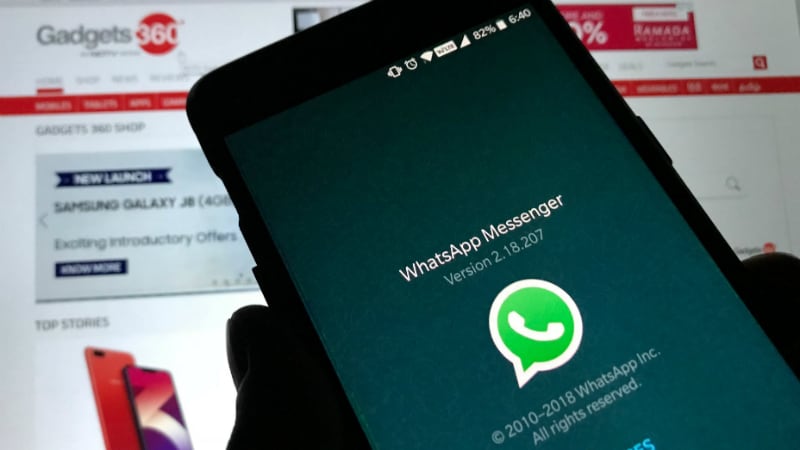 Setting up the pitch for the forthcoming General Elections in India and reassuring the government about its effectiveness in curbing fake news circulation, WhatsApp on Wednesday detailed all the major changes that it has made to address the concerns around the dispersal of misinformation. The Facebook-owned company considers India as one of the key markets since there are over 200 million monthly active Indian users on the instant messaging app as of February last year. The country has also helped WhatsApp gain popularity globally and test its new offerings, including payments and a platform for businesses.

“As a private communications platform, we believe it’s important to maintain the private nature of our service,” said Carl Woog, Head of Communications, WhatsApp, in a session with the media in New Delhi. “And to that end, one of the top priorities is to build automated behaviour of WhatsApp to deal with bulk messaging because that can be a source of clickbait — it can also be a source of problematic content for our users.”

Last year, the spread of false messages through WhatsApp is thought to have resulted in serious incidents of lynching in some states of India. WhatsApp, in order to put the outrage of being a platform to circulate misinformation, brought features such as a limit on forward messages, forwarded label to the forwarded messages, and a nationwide campaign “Share Joy, Not Rumours” in over 10 languages across multiple formats, including television, print, online, and radio. All this has been aimed to cap the flow of misleading information not only in India but across the globe.

While the features to limit forward messages and labelling forwarded messages are already being provided to global users, Woog during the media interaction revealed that WhatsApp is even expanding its media campaign to other countries, including Brazil and Indonesia, as a result of its positive behaviour in the country.

WhatsApp also recently made a list of changes for groups. The company brought an option to let group administrators decide who all can send messages in their groups and the ability to “report” or “exit the group” for new members in one tap.

Aside from the recent changes, over the last three months, WhatsApp removed more than two million accounts per month that were noted to be acting with a bulk or automated behaviour, underlines Matt Jones, who leads the anti-spam engineering team at WhatsApp. Of the total accounts removed for their automated behaviour, Jones mentioned that over 75 percent were without a recent user report.

In terms of letting people report spam messages and misinformation on its platform, WhatsApp provides a “Report” function – previously dubbed the Report Spam feature. A Grievance Officer has also been identified to let users directly highlight concerns pertaining to their WhatsApp experience to an individual if they are unable to report it through other channels. Further, WhatsApp is establishing a local team in India — it has already hired its India head of operations, Abhijit Bose.

The company says the India team of WhatsApp will include local legal, policy, and business teams that will work not just to bring business to the messaging app but also to work with different partners towards common goals, such as increasing financial inclusion and digital literacy across the country. The company is also working with fact-checking organisations such as Boom Live and Alt News and news consortium Ekta to limit the flow of fake messages through its platform.

Having said that, the General Elections are one of the prime events for WhatsApp to showcase how effective its platform is to limit bulk messages and put a hold on the spread of fake news. The company already facilitated training for distinct political parties in the five state elections last year. The training sessions included the awareness around banning of accounts for sending bulk messages to WhatsApp users without their permission.

“As there is an election coming up here in India, we wanted to explain some of the steps that we’re doing to prepare for those elections and to contribute to safety during the election time,” said Woog. “In fact, we’ve been preparing since the Karnataka vote last May, and at that time, we saw how parties try to reach people over WhatsApp and in some cases that evolve attempting to use WhatsApp in a way that was not intended to be used.”

Jones during his presentation at the media session stated that WhatsApp uses an Adversarial Approach that begins at the stage when a user registers on the app. The registration process involves a two-step verification to prevent attackers from attempting to build scam accounts. The executive mentioned that roughly 20 percent of WhatsApp accounts ban at the registration stage by making the system capable of judging user behaviours.

The Adversarial Approach of WhatsApp continues with the messaging process as well. The company, alongside deploying end-to-end encryption, analyse the frequency of account activity to understand normal and abnormal behaviour. It also gets signals of accounts that send bulk messages to a large number of people at a particular point of time. Similarly, there are detection mechanisms in place to target automation and filter out spammers from its user base using machine learning algorithms.

WhatsApp also takes user reports into account while dealing with spam and bulk messaging circulation on its platform. Jones described that if a user reports or blocks the sender’s account, the team at WhatsApp examines the reported account. The reports filed by users on the app also help the team enhance its existing machine learning systems.

There is training data that WhatsApp uses for its machine learning system, based on user behaviour and not dependent on language, a WhatsApp spokesperson confirmed Gadgets 360. “When we receive reports, our team can read them in major Indian languages,” the spokesperson added.

While bulk messaging is often taken into by individuals, Woog at the media session while responding to reporters specified that WhatsApp uses a separate system for business users. It is also important to mention that the filters that WhatsApp uses to curb spammers only take the phone numbers of the suspicious users into consideration. This means the company isn’t able to detect any specifics of users spamming on its platform. Nevertheless, it can detect whether the bulk messages are being sent from India or other regions – by taking a look at the phone number of the blocked user.

For the coming elections, Woog highlighted that WhatsApp is also working closely with the Election Commission and educating political parties about the ethics of messaging on its platform.

Google Cracks Down on Political Discourse in the Workplace