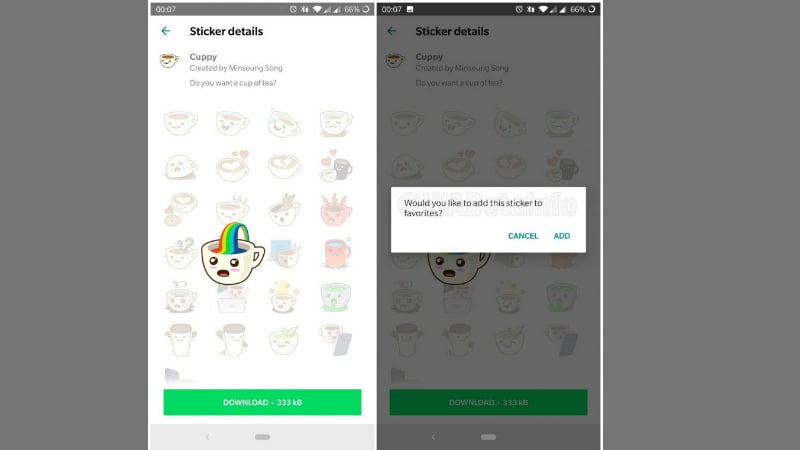 In order to use this download single sticker option, you must be using the latest WhatsApp for Android beta version 2.19.33. After downloading the update, open the in-app WhatsApp Stickers Store and long press on a sticker in a not-yet-downloaded stickers pack. WhatsApp will then prompt to ask if you want to save that sticker as favourite. It will show you the download size of the single sticker and offer a download option at the bottom for saving the sticker in the app.

This new feature is very useful, especially for those who want an uncluttered stickers menu with only the relevant ones showing up. It also saves precious data for all the limited pack users. This feature was spotted by WhatsApp beta news tracker WABetaInfo. The website also states that this feature will be available in the next Google Play stable release with the build number 2.19.33+.

Furthermore, the tipster notes that the WhatsApp for Android 2.19.33 beta update also indicates that the WhatsApp Pay feature may be coming to the United States soon. Previously, the tipster had claimed that it is also set to arrive in Mexico as well. As a part of his remarks during Facebook’s Q4 earnings call, Mark Zuckerberg revealed that the company will roll out Payments on WhatsApp in select other markets this year.

WhatsApp Payments was first introduced in India in February last year, first in the beta version of its Android and iOS apps, later in the stable version. The feature itself still remains in beta and hasn’t been rolled out to all users of the chat app in the country because of the regulatory hurdles.

Flipkart and Amazon Sales: The Best Offers on Mobile Phones