WABetaInfo reports WhatsApp for Android is set to receive a redesigned audio files section that supports the option to add 30 audio files at a time. This is a significant update considering the fact that WhatsApp presently allows users to send only one audio file at a time.

The redesigned section also reportedly lets users preview the audio and image (if available) of the file before sending. Notably, WhatsApp is already playing the audio files once you tap on them. It, however, seems that the new update could let users play or pause the audio files by tapping the play button next to them. There could be a preview of album art associated with the listed audio files. 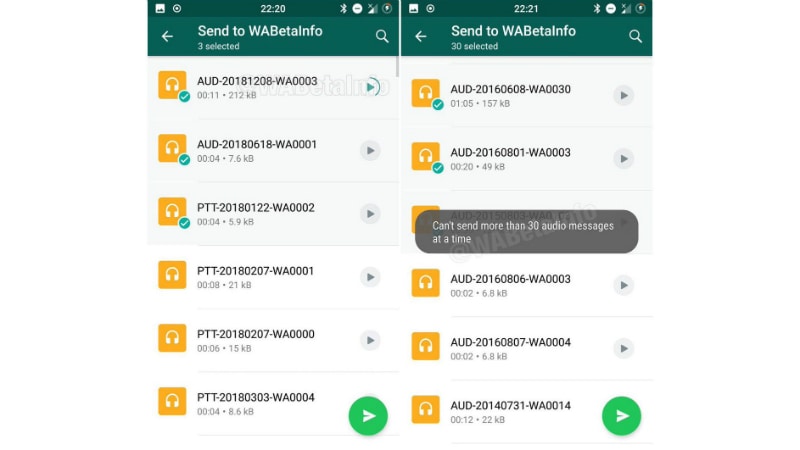 WABetaInfo says that the redesigned audio files section is a part of the WhatsApp beta for Android version 2.19.1. However, the new experience is reported to be enabled sometime in the future, and is currently disabled by default. We weren’t able to spot the described changes in the beta version.

The arrival of the redesigned section on WhatsApp is likely to boost the number of audio files shared among Android users. Last November, WhatsApp was also spotted testing a feature to let Android users play consecutive voice messages one after the other. That feature was said to come into action when the app detects two or more voice messages in a series.

As we mentioned, WhatsApp recently updated its app for all Android users with the anticipated PiP feature. The feature lets users watch the Instagram, Facebook, or YouTube videos they received on WhatsApp in a small window while continue to scroll through conversations simultaneously. This was originally arrived on iPhone and also came to WhatsApp Web last month.