WhatsApp for iPhone has received an important update through build version 2.19.20. The latest update brings the anticipated biometric authentication that allows users to lock the WhatsApp on their iPhone models by deploying the native Face ID or Touch ID. The new feature, which has been in anticipation since October last year – when the new authentication addition was reported for the first time, works similarly to how you can lock Outlook or Signal on your iPhone. It essentially applies biometric authentication to open WhatsApp. However, the feature doesn’t add the additional security to your individual WhatsApp conversations. WhatsApp for Android is also in the rumours to bring a similar form of authentication layer in the coming future.

How to use Face ID, Touch ID on WhatsApp

With the latest WhatsApp update, you can lock the WhatsApp app with Face ID or Touch ID by going to Settings > Account > Privacy > Screen Lock. Once you moved to the Screen Lock screen, the app shows the available authentication method – either Face ID or Touch ID – that you can enable to lock your WhatsApp. You can also choose whether you want the biometric authentication requirement immediately or after an interval of a minute, 15 minutes, or an hour. 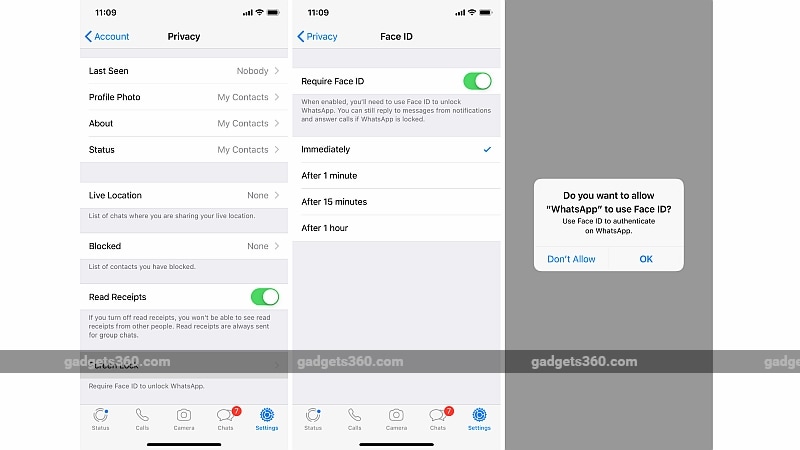 WhatsApp still allows users to reply to messages from notifications and answer calls, without requiring biometric authentication. Also, once unlocked after successfully detecting the correct biometrics – either through Face ID or Touch ID feature – the instant messaging app opens access to all your messages. This means the latest development doesn’t lock your WhatsApp chats on an individual basis.

The ability to unlock using Face ID or Touch ID on WhatsApp works similar to how Outlook and Signal are offering biometric authentication on their iPhone apps for several months. Further, the use of biometrics to unlock could help WhatsApp officially launch its payments feature in India and other markets. The feature is in the testing stage since February last year. Notably, Google Pay that also supports UPI-based transactions, is already supporting Face ID and Touch ID to enable biometric authentication. 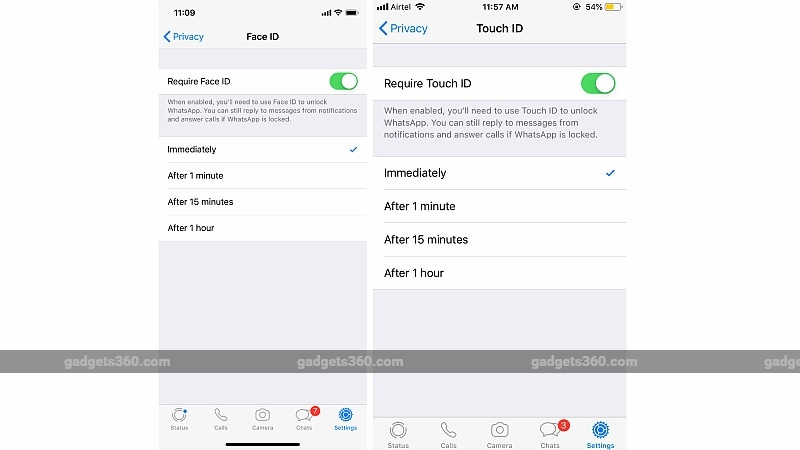 You can choose when Face ID, Touch ID requirement goes into effect

References of the new update were reported back in October last year. Recently, WhatsApp for Android was also reportedly found with some instances to support fingerprint authentication on Android devices.

To experience the new change, you need to download the latest WhatsApp version from the App Store. The app is 137.7MB in size and is compatible with iPhone models running iOS 8.0 and above.