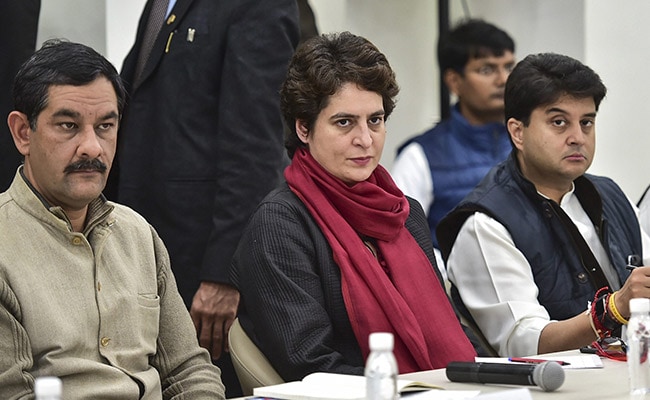 Priyanka Gandhi Vadra attended her first meeting of the All India Congress Committee (AICC) on Thursday, conspicuously seated away from her brother and Congress chief Rahul Gandhi. Sitting next to her instead was Jyotiraditya Scindia, general secretary in charge of western Uttar Pradesh.

News agency IANS quoted political observers as saying that Priyanka Gandhi was allotted a seat away from Rahul Gandhi for a very good reason. Apparently, it was done to send the message that the Congress president’s younger sibling was just as important as any other AICC general secretary in the room.

With the 47-year-old formally entering politics on January 23, sources said it has been decided that she will handle 44 of the 80 Lok Sabha seats in Uttar Pradesh while Mr Scindia takes care of the rest. Both of them are likely to participate in a road show headlined by Rahul Gandhi — starting Monday. According to sources, the newly inducted party leader will stay put in Lucknow for the first three days to set up an office and meet local leaders. She will then rejoin the others on the road show, travelling through cities like Allahabad.

She was earlier allotted a room next to her brother’s at the AICC headquarters. However, before any speculations could arise, Mr Scindia was allotted space in the same room to show that both he and Priyanka Gandhi occupy the same level in the party hierarchy.

Yesterday, Priyanka Gandhi had met a few party workers and leaders from the state during the 15 minutes spent in the Congress headquarters, even as security personnel faced an uphill task controlling the crowd that had gathered there. A large number of party workers welcomed her by raising slogans of Priyanka Gandhi aayi hai, nayi roshni layi hai (Priyanka Gandhi has come, she has brought a new light).

The ruling BJP, predictably, was not as enthusiastic about her entry. Surendra Singh, a lawmaker from Uttar Pradesh’s Ballia, termed the Congress president as “Raavan” and his sister as “Surpanakha” in a recent media interaction. While senior BJP leader Kailash Vijayvargiya said the Congress was fielding “chocolatey” faces in Lok Sabha polls because it lacks strong leaders, his colleague — Vinod Narain Jha — claimed that Ms Gandhi has no quality other than “beauty”.

That doesn’t seem to have dampened the Congress’ mood. Punjab Chief Minister Amarinder Singh today said that Congress president Rahul Gandhi and party general secretary Priyanka Gandhi Vadra make a “great team” that will “wipe out” the Modi government in the upcoming Lok Sabha polls, and there are many others who echo the sentiment.