Judging the greatness of a football shirt goes far beyond the aesthetic. You also have to take a look at the context.

Even the finest shirt can have its beauty tainted forever by woeful football, especially if it then becomes a visual prompt for the time which you cried in the stands or smashed your fists through the television.

There is also a flip side to this. A shirt which at first seems rather underwhelming can soon become historic. In the industry of football shirts, it does not take long for ugly to become iconic.

So when tasked to choose a ​Tottenham shirt which stands out above the rest, there was plenty of factors to take into account, which left me with a rather cluttered shortlist.

Shirts that deserves honourable mentions include the 1991-93 yellow away shirt, which for me, just recalls Jurgen Klinsmann, and how it was unbelievable that he was at Spurs. It is also a nostalgic 90’s style, featuring a shoulder design which resembles pixelated bird dirt. The 2007/08 home shirt, which was worn during Tottenham’s last cup triumph, as Jonathan Woodgate found the back of the ​Chelsea net in the League Cup final after the ball was punched onto his forehead by ​Petr Cech.

And the 2015/16 home shirt, which saw the club go unbeaten at White Hart Lane in the Premier League during Spurs’ last ever season at their historic home.

However for me there was one that just edged those out. The 2010/11 home shirt is a controversial choice, but shirts mean different things to different people.

This one, for me is a symbol of the start of Tottenham’s evolution, from a club indecisively flitting at the edges of the Premier League top half club, to one which is now established as one of the country’s top sides.

The shirt itself was, at first glance, a slightly underwhelming, retro effort from Puma, with Tottenham’s classic lilywhite accompanied by a rather wonky block of navy blue which lopsidedly covered the shoulders, with an additional skew-whiff navy blue line which sat just beneath.

The major negative though was the shirt sponsor, which looked as though it had been knocked together on Microsoft Paint. 100 points for anyone who knows what Autonomy does, or did. Despite its flaws, visually the shirt was decent. However, the season that followed its release is what ensured its spot at the top of the kit pile.

For Tottenham Hotspur, the 2010/11 campaign was a historic one.

Not because the club achieved their best ever Premier League finish… because they didn’t.

Not because it recalls fond memories of the club winning silverware… because they didn’t.

Not even because they finished above North London rivals ​Arsenal… because yet again, they didn’t.

The Lilywhites actually finished fifth in the Premier League, were knocked out of the League Cup by Arsenal in a 4-1 thrashing and were also hammered by ​Fulham 4-0 in the fourth round of the FA Cup.

However, none of this mattered really, because Tottenham had become part of Europe’s elite!

Tottenham’s maiden season in the UEFA Champions League was a reward for an unexpected fourth-placed finish the previous campaign, memorably sealed by an instinctive ​Peter Crouch header past a despairing Martin Fulop in a 1-0 victory away at ​Manchester City. Unfortunately for Crouch, his magic moment was slightly spoiled by whoever at Puma decided that white and yellow would be a winning combination for that year’s shirt. Disgusting. 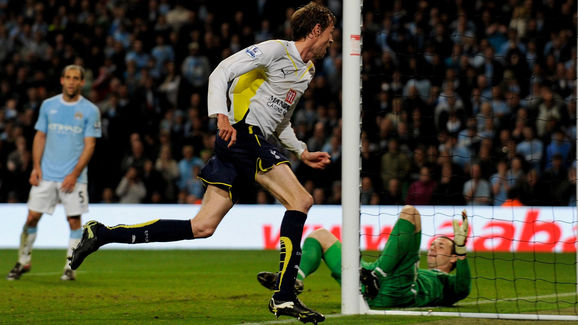 Thanks to that victory, just looking at the 2010/11 home shirt brings back goosebump inducing memories.

The shirt was worn by a collection of some of the classiest talent that Spurs fans have seen with a cockerel on their chest. With ​Gareth Bale, ​Luka Modric and Rafael Van der Vaart all shining during the campaign. It also symbols how far Tottenham have come since then, as the shirt was also sported by Sebastien Bassong, Alan Hutton and an ageing William Gallas.

Moments also make great shirts. The 2010/11 shirt was there for: Gareth Bale’s performances against Inter (which contained a hat-trick in Milan and the career unravelling of Brazilian full-back Maicon), Rafael Van der Vaart celebrating passionately in front of a jubilant White Hart Lane crowd after walloping in a shot against FC Twente and the gangling right leg of Peter Crouch guiding Aaron Lennon’s pass into the bottom corner at San Siro against ​AC Milan. Tottenham were rather comprehensively knocked out by ​Real Madrid in the quarter finals. However, this campaign, this shirt, showed that Tottenham could compete against the best the continent had to offer. It was a campaign that set the foundations for Spurs in the years to come.

Tottenham were about to embark on a new chapter of their long history, a chapter which still continues to this day, as Spurs continue to establish their reputation amongst football’s finest. This shirt is an icon of the new and less ‘Spursy’ Spurs.

When & Where to Watch Watford's Players During the October International...