It’s summer 2014, and Brazil are taking on Germany in their own backyard. It’s the World Cup semi-final, the global football community are glued to their TV sets, the carnival atmosphere is at fever pitch. It seems written in the stars that the host nation will lift the trophy for a historic sixth time. But things didn’t quite go to plan…

As you might well recall, Germany completely obliterated Luiz Felipe Scolari’s side in a 7-1 humiliation, and were 5-0 up in under half an hour, with four goals flying in within a six minute period. The image of a shellshocked, broken David Luiz will never leave me, as the Chelsea man tearfully apologised to the nation for the side’s shambolic performance. 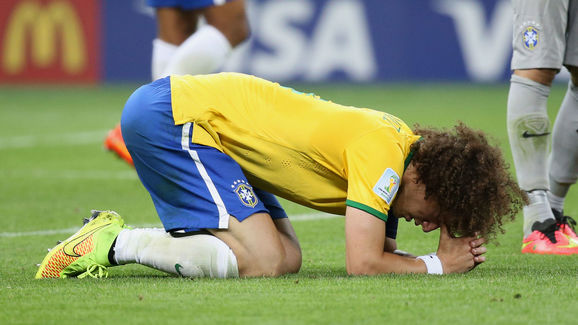 Flash forward five years, and the 31-year-old played a part in a performance eerily close to that fateful night in Belo Horizonte: ​Chelsea’s 6-0 destruction at the hands of Manchester City. While the full-backs were arguably more to blame than Luiz, he still looked absolutely clueless in defence, and allowed the ​Citizens to run riot at the Etihad Stadium.

And that performance was just the tip of the iceberg; throughout the campaign, the defender has been at fault for a hefty proportion of the 29 goals the ​Blues have conceded in the ​Premier League, and has looked completely incapable of creating a reliable, communicative centre-back partnership with Antonio Rüdiger.

David Luiz is having an absolutely shambolic game. Three times now he’s getting close to making a critical mistake

Just last week, when the ​Blues looked to have secured a comfortable 2-0 win over Malmö in the Europa League, his defensive error (followed by a half-hearted jog back to correct it) led to a precious goal for the hosts, setting up an unnecessarily tense affair at Stamford Bridge next week. Peak David Luiz, ladies and gentlemen.

Now, let’s get a few things straight about the player: Firstly, he’s arguably one of the best long-range passers of the ball in the Premier League, if not Europe. He’s got more flair than a samba dancer juggling flaming swords; even his simple passes along the backline are played with a ridiculous level of showmanship. In short, his technical skills are, quite frankly, exceptional.

This facet of Luiz’s play has been picked up by previous Chelsea managers before, and both José Mourinho and Rafael Benítez briefly flirted with the idea of playing the mercurial defender in a midfield role. Conte tried it during his second season at the club, and the player excelled during a clash with Roma – but a calf injury cut short what looked to be a tactical masterstroke. Maurizio Sarri is a stubborn man – he’s the kind of fella who will pointedly say ‘series’ instead ‘season’ until the bitter end – and getting him to shake up his tactical approach will be a tough task. But if Chelsea (and Luiz) keep failing, he’ll be forced to try something different to improve his side’s fortunes. Playing Luiz in midfield could be the tactical change that solves everything.

Jorginho, Sarri’s golden boy, has not been a popular addition to the side with Chelsea fans – he’s been constantly bullied and harried by opposition players, and has seen N’Golo Kanté shunted out of his favoured position. In Italy, Jorginho was operating in the more offensive, ‘Regista’ role, but he’s been bumbling around as a deep-lying playmaker for the Blues.

If Sarri were to play Luiz in a more advanced role, he could pair him with Kanté in a mouth-watering holding midfield duo, which would allow Jorginho the freedom to push forward and dictate the play more effectively. Luiz, as previously mentioned, has the passing ability of a seasoned NFL quarterback, and could thrive if freed of his strictly defensive role. Kanté’s dogged determination to defend would also afford Luiz the freedom to make his trademark marauding runs up the field, which we can all agree is a far more pleasing trait in a midfielder than a centre-back. And, in the summer, Chelsea could invest in a brand new, shiny central defender to partner the promising Rüdiger – it all just makes perfect sense!

Of course, as fans (including myself) often fail to appreciate, this isn’t a computer game like FIFA or Football Manager. Hurling a player into a new position, and trying a completely new formation isn’t going to work instantly – it needs time and patience. But Luiz isn’t too long in the tooth to adapt his game, and has what it takes to make the transition with aplomb.

Luiz’s passion for Chelsea cannot be questioned. Sure, he celebrated like a madman when his late goal for Paris Saint-Germain helped them knock the Blues out of the Champions League, but given the circumstances, you can’t really blame him for showing some passion.

In the past, especially under Conte, the former Benfica man would purposefully grab the ball before every free-kick, confident in his abilities to stride up and smash in a thirty-yard scorcher. Having that charismatic character revived, in a fresh new role, is exactly what Chelsea need to get back on track this season.

For me, music is an emotion: Adhyayan Suman