​China’s recent attempts to establish themselves as a global footballing superpower have seen many players leave Europe in huge transfers. The likes of Paulinho, Alexandre Pato and Yannick Carrasco have all made the move, and West Ham United’s Marko Arnautovic is the latest name to be linked with a move to China.

The Hammers received an offer of £35m for the forward from an unnamed Chinese Super League side, but swiftly rejected the proposal and ​insisted that Arnautovic was not for sale. However, could they live to regret that stance? 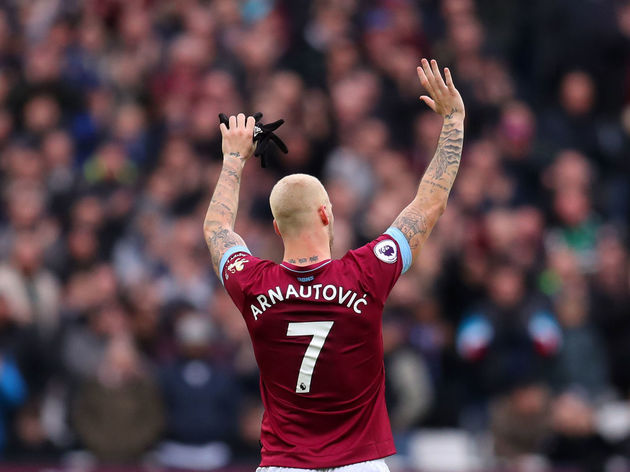 ​Arnautovic‘s agent has ​confirmed that his client wants to move to China, and Arnautovic appeared to be waving goodbye to the ​West Ham fans as he left the field during Saturday’s 1-0 victory over ​Arsenal. He wants to go, and West Ham should not hesitate accept £35m for him.

The Austrian has undoubtedly been West Ham’s star player in recent years, but he has seen his throne taken by new signing Felipe Anderson, who has been in stunning form since moving to London. Arnautovic is no longer the first name on the team sheet, and he should not be viewed as an untouchable.

His talent is not up for debate – Arnautovic has the potential to be one of the most dangerous forwards in the league – but his attitude has proven to be a problem for Arnautovic throughout his career. Sometimes, he appears disinterested, almost proving to be more of a burden than a blessing.

Arnautovic subbed off and waves goodbye to the crowd, then shouts “I’LL BE MAKING SH*TLOAD OF MONEY IN CHINA LADS, YOU’D DO THE SAME”

Another factor to take into consideration is his age. Arnautovic will turn 30 in April, which suggests that he will soon be entering the twilight of his career. His time as an elite talent is certainly limited, and West Ham would be foolish to reject a £35m offer for the ageing forward.

Should he leave, Arnautovic would certainly need to be replaced. Outside of Anderson and Arnautovic, West Ham are not blessed with many goal threats. The likes of ​Javier Hernandez and Robert Snodgrass cannot be relied upon to replace Arnautovic, meaning they would need to enter the transfer market.

There are plenty of options across Europe who could be tempted by a move to England, and there may even be options who already ply their trade in the ​Premier League. Chelsea‘s Michy Batshuayi, who has previously been linked with a move to the club, could certainly be available, whilst the likes of Kasimpasa hitman Mbaye Diagne or Porto’s Moussa Marega could provide the desired physicality in attack.

Thanks to Anderson’s eight Premier League goals, life without Arnautovic suddenly does not seem so scary for West Ham fans. If a suitable replacement can be found, West Ham must consider allowing him to leave, before his situation turns toxic for everyone involved.