Zaha was given two yellow cards in quick succession during the 1-1 draw at St Mary’s Stadium, first for clashing with James Ward-Prowse and then for sarcastically applauding referee Andre Mariner in response to his initial booking. 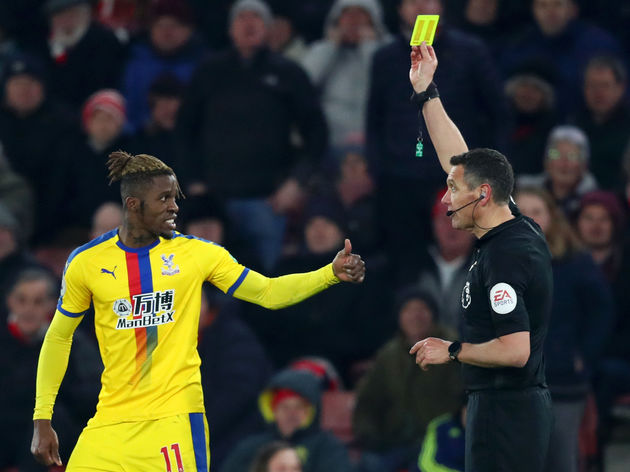 ​Zaha served his one-match ban in ​Palace‘s subsequent Premier League match against Fulham, but he faces further punishment after being charged by the FA for his behaviour, which persisted after he had been shown the red card.

The ​Daily Mail reports that Zaha had until 6pm on Tuesday to contest the charge. There has not been any update but Palace insiders say he has indeed lodged an appeal and will be given the chance to explain his actions to the FA.

Here we go, pundits telling Zaha to take it as a sign of respect when he receives four potential leg breakers every game. Tiresome bollocks.

In the immediate aftermath of the game, Zaha publicly apologised to his teammates for leaving them to see out the final few minutes of the match with ten men.

“All I can do is apologise to the team and the fans for my red card because I could have cost us,” he said. “I will learn from it for sure.”

His manager Roy Hodgson said that he had ’empathy’ for Zaha, claiming that the Ivorian international had been ‘fouled a lot’, but admitted that the player’s petulance was indefensible. “His reaction to not receiving a foul when he was clearly pushed off the ball – obviously people do get frustrated,” said Hodgson.

“But I can’t condone, unfortunately, the applauding of the referee. That is something you can’t do.”

Zaha is likely to be suspended for Saturday’s match against ​West Ham at Selhurst Park if his appeal is unsuccessful.

Ram Kapoor on MeToo movement: It's a double-edged sword, risky and...