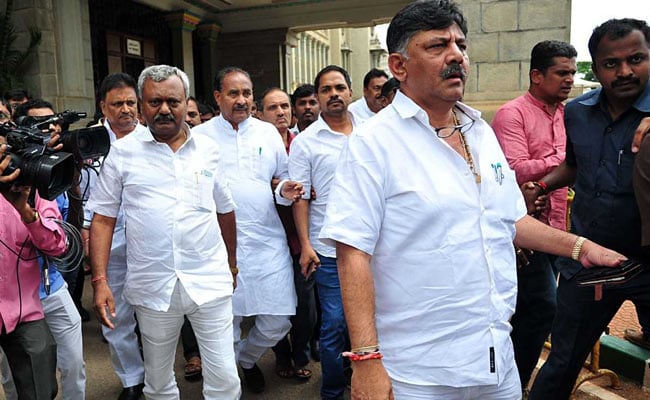 Karnataka minister DK Shivakumar, the chief troubleshooter of the Congress in the state, on Saturday put up a brave face and said there was still time to salvage the crisis unfolding for the coalition government after 11 legislators announced they had resigned. He also conceded that he tore up resignation letters of the rebelling lawmakers, as alleged by opposition BJP leader BS Yeddyurappa, defending the action as one out of “emotion”.

“Yes I did tear resignation papers. I did that out of my emotion. Let them file a complaint against me. I have taken a very big risk. I did this to protect my party and friends,” he said.

“They (legislators) are saying some stories. This is not the story to go and resign. It’s shocking to all of us. Good sense shall prevail upon them. There’s still lot of time,” Mr Shivakumar said, adding that “harsher” decisions can be taken.

BS Yeddyurappa had lashed out at Mr Shivakumar’s efforts to contain the crisis earlier. “People are watching the way DK Shivakumar is behaving. He tore resignation letters of some of the MLAs inside the Speaker’s office, who had gone to resign. It is condemnable,” the BJP leader said. His colleague DV Sadananda Gowda said the BJP is ready to form the government in Karnataka if it received an invitation from the governor.

The Congress-Janata Dal coalition government in Karnataka appeared to be teetering on the edge with nearly a dozen lawmakers submitting their resignation on Saturday.

With Chief Minister HD Kumaraswamy still in the US on holiday, Mr Shivakumar swerved into action holding meetings with the estranged legislators.

“Nobody will resign. I had come to meet the MLAs,” he told journalists. He led three Congress legislators, including Ramalinga Reddy, to a huddle to try and persuade them to change their mind. However, the legislators lined up with all the dissidents for a joint briefing outside the governor’s residence.