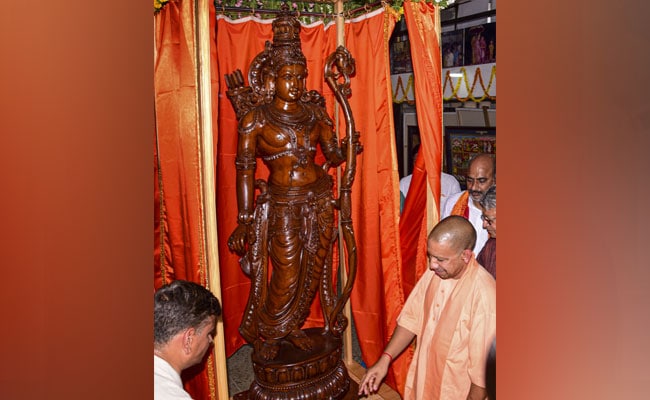 Uttar Pradesh Chief Minister Yogi Adityanath today unveiled a seven-foot-tall statue of Lord Ram at a museum in Ayodhya. During his visit, Yogi Adityanath also released books and a postal cover, in addition to honouring the sculptors, painters and writers at the museum, news agency ANI reported.

The statute is made of a single block of rosewood and purchased from Karnataka for Rs 35 lakh. It will be on display at the Ayodhya Shodh Sansthan.

Ayodhya Shodh Sansthan is a government-funded museum established in 1986. It hosts works related to the Hindu epic Ramayana.

The statue depicts Kodamb Ram – one of the five avatars of Lord Ram. The life of Lord Ram is divided into five stages – Baal Ram, Raja Ram, Dulha Ram, Banvasi Ram and Kodamb Ram, according to Director of the Ayodhya Shodh Sansthan YP Singh. The stages are worshipped in different regions of the country.

Kodamb Ram is worshipped in the south and depicts the stage of Ram’s life when Sita was kidnapped by the demon king Ravan. The statues from that phase of Ram’s life show Ram alone, without Sita and Laxman.

Yogi Adityanath released a special cover on the Kodamb statue of Lord Ram by the Postal department, ”Archaeological Report of Ayodhya”, ”Ramleela journey of the Carribean countries” and two other books.

Yogi Adityanath also inspected the developmental works in Ayodhya during his visit.

Ayodhya, where Lord Ram is said to have been born, is at the heart of a decades-old dispute involving the site where the 16th-century Babri mosque stood before it was razed in 1992 by Hindu activists. The activists believed that it was built on the ruins of an ancient temple marking the birthplace of Lord Ram. In riots following the mosque demolition, 2,000 people died across the country.

Last year, the Uttar Pradesh government announced a project to build a Ram statue on the banks of the Sarayu river, expected to measure 221 metres – topping even the famed freedom movement icon Sardar Patel’s Statue of Unity in Gujarat.